Principle of a Capacitor

What is a Capacitor

An every day use

To remove sparking in the ignition system of an automobile. When an electric current is switched on or off there is an induced current which can create sparking. If we put a capacitor in the circuit this current charges the capacitor instead and this will avoid occurrence of sparking.

Charge is proportional to potential

We can re-write this as the following equation

Here C is the capacitance of the conductor

1. Shape and size of the conductor

3. Presence of other conductors

We can re-write the equation as:

However, Farad is a very large unit so we use smaller units like

Capacitance of an Isolated Spherical Conductor 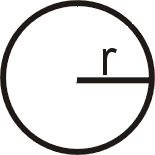 Consider the capacitance of an isolated spherical conductor. Say we have as sphere of radius r and say charge Q is given to the conductor.

We can write that potential

thus the capacitance of a spherical conductor is

Principle of a Capacitor

There is a limit to the amount of charge that can be given to the plate because as charge is given its potential rises and beyond a certain limit the charges start leaking. 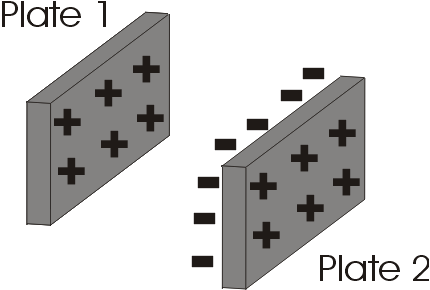 Now if we earth the outer side of the second plate. Then the positive charge on this side will go to Earth.With this plate 1 will be able to hold even more positive charge. 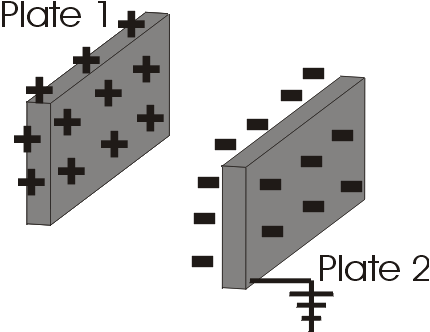 This is the principle of a capacitor

A typical capacitor which is a parallel plate capacitor is made up of two parallel plates which are separated by a distance d. A is the area of cross section of these plates and if +Q charge is given to one plate there will be -Q charge on the other plate. 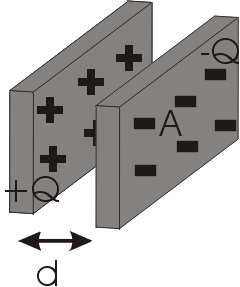 How do we charge this kind of a capacitor? Let us see an electrical circuit. A capacitor C is indicated as two parallel lines. The circuit also has a battery V and a switch K. When the key is switched on, electrons from the first plate start moving towards the positive end of the battery. This means that current is flowing from the positive end of he battery to its negative end. 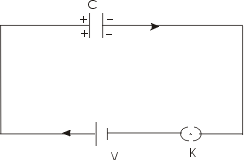 Thus the positive end of the battery will extract electrons from one plate and deposit them on the other plate. As a result one plate will acquire positive charge and the other plate will acquire negative charge. This process is going to continue till the time the capacitor also acquires a potential V which is exactly equal to the potential of the battery. Then the current will stop. Now the capacitor has charge stored on it and the potential difference across the plates is exactly equal to the potential difference on the battery. Or charge stored can be written as