See a collection of solved examples for this topic on our website buzztutor.com

Projectile is a body thrown with an initial velocity in the vertical plane and then it moves in two dimensions under the action of gravity alone without being propelled by any engine or fuel. Its motion is called projectile motion. The path of a projectile is called its trajectory.

A body can be projected in two ways :

A body is thrown with an initial velocity u along the horizontal direction.We will study the motion along x and y axis separately.We will take the starting point to be at the origin. 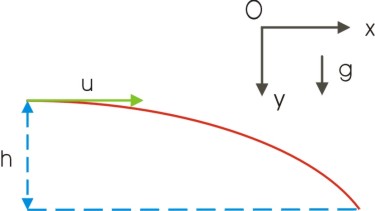 Equation of a trajectory(path of a projectile)

Subsituting for t we get

This is the equation of a parabola which is symmetric about the y-axis.Thus,the path of projectile,projected horizontally from a height above the ground is a parabola.

Net velocity at any instant of time t

We know ,at any instant t

Direction of v with the horizontal at any instant :

Time of flight (T):
It is the total time for which the projectile is in flight ( from O to B in the diagram above)

Range (R) :
It is the horizontal distance covered during the time of flight T.

We will now consider the case when the object is projected with an initial velocity u at an angle to the horizontal direction.

We assume that there is no air resistance .Also since the body first goes up and then comes down after reaching the highest point , we will use the Cartesian convention for signs of different physical quantities.The acceleration due to gravity 'g' will be negative as it acts downwards.

Equation of Trajectory (Path of projectile)

This equation is of the form y= ax + bx2 where 'a' and 'b are constants.This is the equation of a parabola.Thus,the path of a projectile is a parabola .

Net velocity of the body at any instant of time t

Φ= tan-1(vy/vx) Where Φ is the angle that the resultant velocity(v) makes with the horizontal at any instant .

Range is the total horizontal distance covered during the time of flight.