See a collection of solved examples for this topic on our website buzztutor.com

Velocity is a vector quantity. Its magnitude is called speed and also it has a direction. A body of mass m is moving in a circular path of radius r. There are two possibilities:

Where v is the speed. The direction of velocity is along the tangent to the circular path. Thus it changes as the body is at different positions at different times.

Other relations for F:

Consider that there are a number of particles forming a system, such that, when an external force is applied, the complete system moves as on. Now, if we are able to replace all these particles by just one particle. And, this new particle is placed in such a manner and has such a mass, that when acted on by an external force, it moves exactly in the same manner as the system it replaced. Then, we have found the center of mass of the system. (This sounds more complex than it is. So don't worry! read on)

Center of mass of a two particle system

Let us now consider two particles. Let them have masses m1 and m2. Let r1(t) and r2(t) be the position vectors of the two particles at the instant of time t. (Note: On a web page it is difficult to use the usual vector notation. So I will use bold fonts to depict vectors). The position vector Rc.m.(t), giving the center of mass of this system is given by the formula.

Center of mass of a large number of particles

Center of mass of a rigid body

Center of mass of some rigid bodies

So if ω is the average angular velocity, θ the angular displacement and t the time interval. We can say 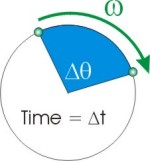 So we can write the instantaneous angular velocity as dθ /dt